Glyphosate is one of the most widely used active substances in pesticides to prevent unwanted plant growth around planted crops or to kill plants or parts of plants. These substances are often called ‘herbicides' or ‘weedkillers'.

Glyphosate is used in agriculture and horticulture to combat weeds before sowing. Where genetically modified plants with resistance to glyphosate are grown, the substance is also used after sowing to kill weeds growing amongst the crops. This practice does not, however, happen within the European Union.

ECHA manages the law on the classification and labelling of substances and mixtures. This law regulates the way in which substances are assessed and labelled, based on the hazardous properties they may have – for example poisons, flammable substances, corrosive substances and so on.

For certain substances, such as active substances in pesticide products, a decision on the classification may be made at EU level to apply across the whole of Europe. In practice, this means that the relevant labelling will be required to warn consumers on every product containing the substance.

The consultations carried out by EFSA and ECHA on the draft assessments of glyphosate attracted an unprecedented number of comments, confirming the high level of interest in this substance. Such a level of public participation underlines the importance of transparency in the evaluation of active substances in the EU.

The input received from the consultations, together with the replies received by EFSA from the applicant (the Group on the Renewal of Glyphosate) in response to its request for additional information, added a significant amount of information to a dossier that already contained far more scientific data than are usually available for such assessments.

This additional information will be thoroughly considered by the Assessment Group on Glyphosate (AGG), composed of four EU Member States – France, Hungary, the Netherlands and Sweden – that is now updating their initial draft renewal assessment report (dRAR).

Against this background, EFSA and ECHA have revised the timeline for the remaining steps in the re-evaluation process.

New articles potentially relevant to the classification of glyphosate have been published. They relate to the following hazard classes:

ECHA is looking for comments related to these by 14 April.

The parallel consultations on glyphosate held by EFSA and ECHA closed on 22 November 2021.
During the two-month consultation, all interested parties had access to the scientific evaluations prepared by the national competent authorities of Hungary, France, the Netherlands and Sweden, known collectively as the Assessment Group on Glyphosate (AGG).
A total of 416 submissions were received through the two consultations from within and outside the EU, the majority of them coming from Argentina.

These submissions – some carrying multiple comments  – are publicly available and can be found on the EFSA and ECHA websites.

The graphs below provide a snapshot of the submissions received. 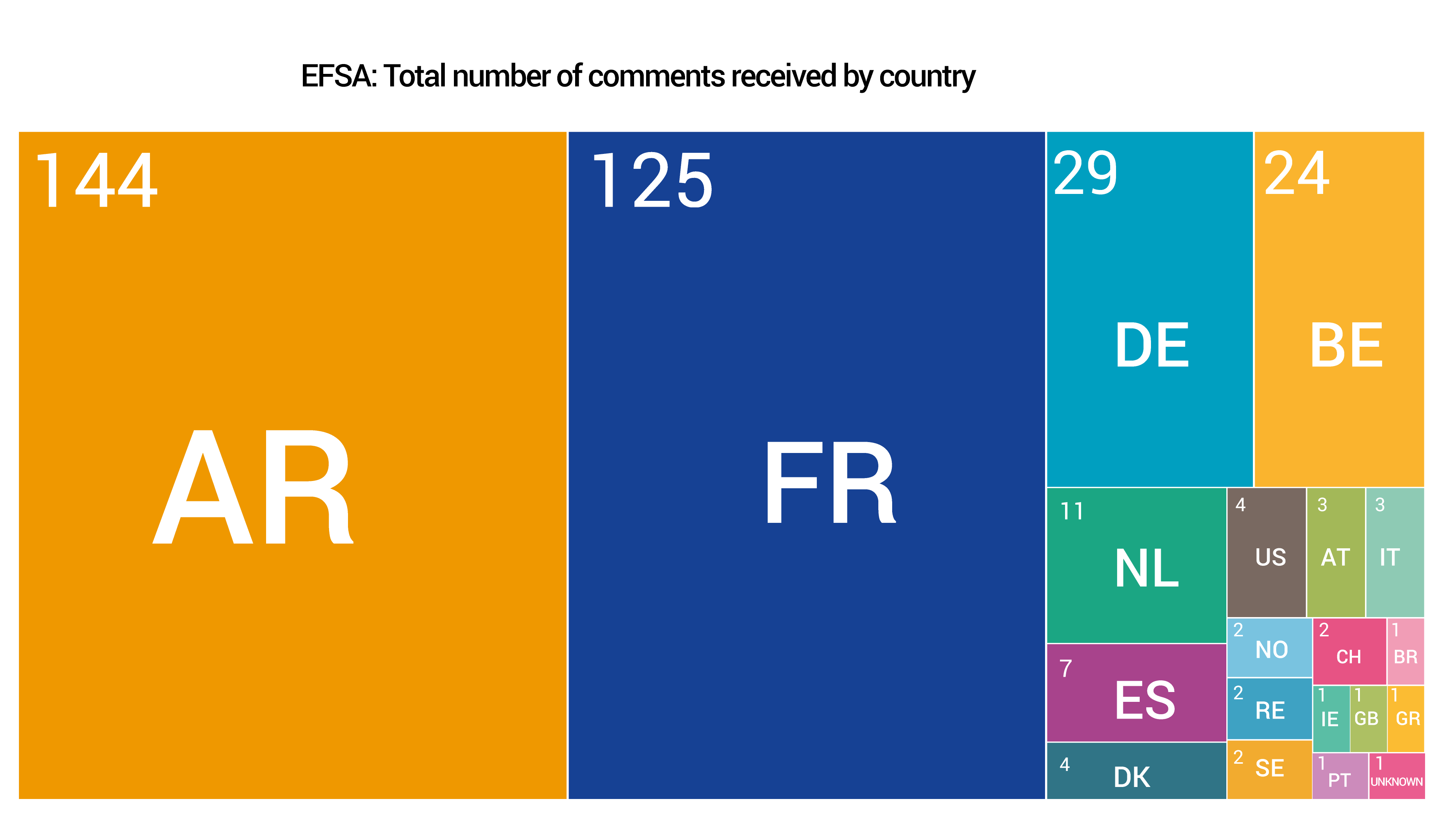 Next steps in the EU re-evaluation of glyphosate

The comments and observations received through the consultations have been shared with the AGG, who will consider and respond to them.

For the classification process, the AGG will provide its responses to ECHA’s Committee for Risk Assessment (RAC). The RAC will develop its opinion on the classification of glyphosate under the Classification, Labelling and Packaging (CLP) Regulation. This is currently expected in May/June 2022.

For EFSA’s assessment, following the AGG’s evaluation of the comments received through the consultation, a clock stop could be applied to request additional information from the Glyphosate Renewal Group (GRG). An updated assessment (RAR) will then be produced by the AGG and will be sent to EFSA to proceed with the peer review. EFSA will take the outcome of ECHA’s opinion into account in its peer review, which is expected to be finalised in the second half of 2022.

Regular updates on the work can be found on the EFSA and ECHA websites.

ECHA and the European Food Safety Authority (EFSA) have started parallel consultations on the initial scientific evaluations of glyphosate. The consultations will run for 60 days and all interested parties are encouraged to contribute.

EFSA and ECHA will launch parallel consultations on the Renewal Assessment Report (RAR) and the Harmonised Classification and Labelling (CLH) report on glyphosate by 24 September 2021. All interested parties will be able to contribute to the ongoing scientific assessment by submitting relevant comments and information. The consultation will remain open for 60 days.

The Assessment Group on Glyphosate submitted updated versions of the Renewal Assessment Report (RAR) and the Harmonised Classification and Labelling (CLH) report to EFSA and ECHA respectively. The two EU regulatory agencies will now carry out the administrative work that is needed before the documents are made available for consultation. The parallel consultations were announced for the first week of September 2021 but will be rescheduled. The new date will be communicated in due course.

In 2019, the Glyphosate Renewal Group (GRG) formally applied to renew the approval of glyphosate for use after the current approval expires at the end of 2022.

Four EU Member States – France, Hungary, the Netherlands and Sweden – form the Assessment Group on Glyphosate (AGG). They assessed the application and submitted their reports to ECHA and European Food Safety Authority EFSA.

In parallel with EFSA's assessment, ECHA's Committee for Risk Assessment, RAC, reviews the classification of glyphosate. RAC’s review focuses solely on the hazardous properties of the substance and does not take into account the likelihood of exposure to glyphosate.

RAC's assessment starts in 2021. A consultation on the classification proposal was launched in September 2021. RAC's final opinion is expected in 2022 and it will feed into EFSA's risk assessment.

Based on EFSA's risk assessment, the European Commission will decide on the renewal of the approval of glyphosate.