The third and last REACH deadline for registering substances manufactured or imported in quantities of 1 to 100 tonnes per year closed on 31 May 2018. This deadline concluded the 10 year REACH registration journey for existing (phase-in) chemicals on the EU/EEA market.

Companies could benefit from these deadlines if they were manufacturing or importing existing (phase-in) substances that had a valid pre-registration done either in 2008 or at the latest one year before the relevant deadline. They could register with ECHA at any time between REACH’s entry into force in 2008 and the relevant deadline.

Registrations were received from companies in all 28 EU Member States and three European Economic Area (EEA) countries, with the largest shares coming from Germany (25 %), the United Kingdom (14 %) and France (10 %). The top five non-EU countries from which companies submitted their registrations through only representatives are the USA (27%), China (15%), Japan (14%) India (12%) and Switzerland (6%).

Overall, companies have registered less substances than estimated in 2006 by the European Commission (~30 000 substances). There might be several reasons, but what is clear is that many companies have rationalised their substance portfolios making their registration decisions based on business analysis. They have, therefore, registered fewer substances than initially planned when they pre-registered. The impact of this in the chemicals’ supply chains will only be clearer by the end of the year.

Full picture in the autumn

REACH registrations after May 2018

Now that the 10-year transitional period is over, any company manufacturing or importing a chemical in amounts of more than one tonne per year needs to have it registered under REACH before placing it on the EU/EEA market. Also, the companies that have completed their registrations need to keep the information up to date, to reflect, for example, the correct production volume, new uses, and the most recent safe use advice.

NB: The numbers for registrations and substances are different as one substance can be registered by more than one registrant (company). Each registrant must submit their own registration, though companies work together to share data on the substance. 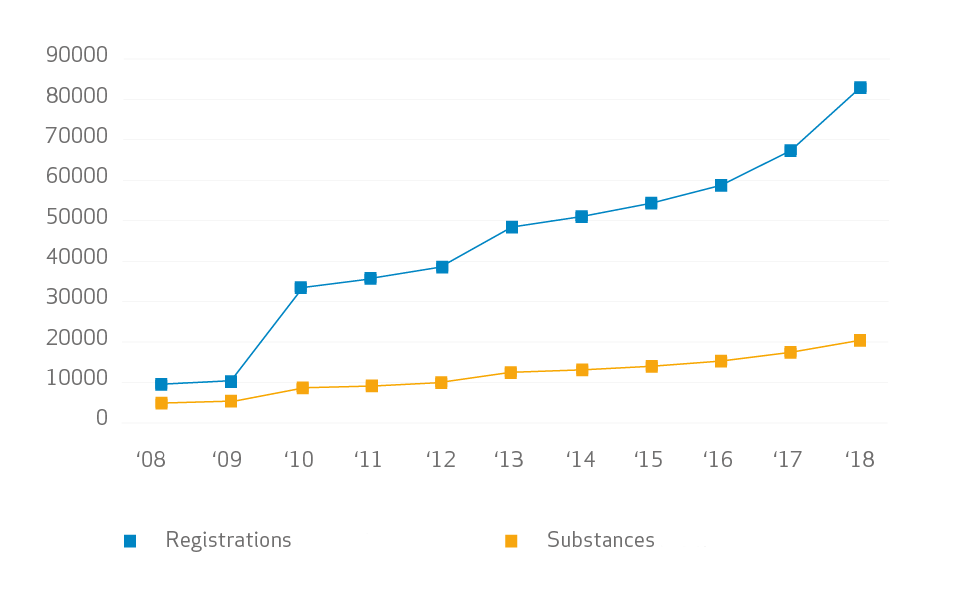 Breakdown by the registrants’ company sizes

The table below shows a breakdown of the number of registrations by company size (micro, small, medium-sized or large company) as indicated by the companies. Companies’ self-declarations are verified by ECHA in due time.

* These are registrations for substances notified under the regulation preceding REACH, known as the notification of new substances (NONS). NONS substances are considered registered under REACH.

The total tonnage band for a substance is determined by adding the volumes of all registrations received for that substance and translating their sum into a band.

Breakdown of registrations by tonnage band

The table below shows a breakdown of the number of registrations and substances by tonnage bands, intermediates under strictly controlled conditions and NONS.

NONS are registrations for substances notified under the regulation preceding REACH, known as the notification of new substances (NONS). NONS substances are considered registered under REACH.

* The same substance can be registered for many tonnage bands. Hence, the numbers do not add up to the total number of unique registered substances.

The table below shows the top 10 countries in the 28 EU Member States and the European Economic Area countries (Norway, Iceland and Liechtenstein) in terms of number of registrations. Numbers for individual EU/EEA countries are available in the registration statistics infographic.

You can see those substances with submitted and completed registrations on the lead registrant list, unless the name of the substance has been claimed confidential by the registrant.

You can find further details on completed registrations, substances and the EU/EEA country-specific numbers in the registration statistics infographic.

Go to the infographic